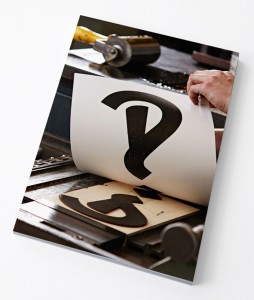 Ditchling Museum of Art + Craft’s Interrobang exhibition of international letterpress has now closed but we would highly recommend getting hold of a copy of the beautiful Random Spectacular journal that accompanied the show while they last.

Interrobang journal includes all of the work from the exhibition plus some great articles and opinions on the current state of letterpress.

Simon Lewin from St Judes, who published the journal, has also written about a few of his favorite prints from the show on Grafik. 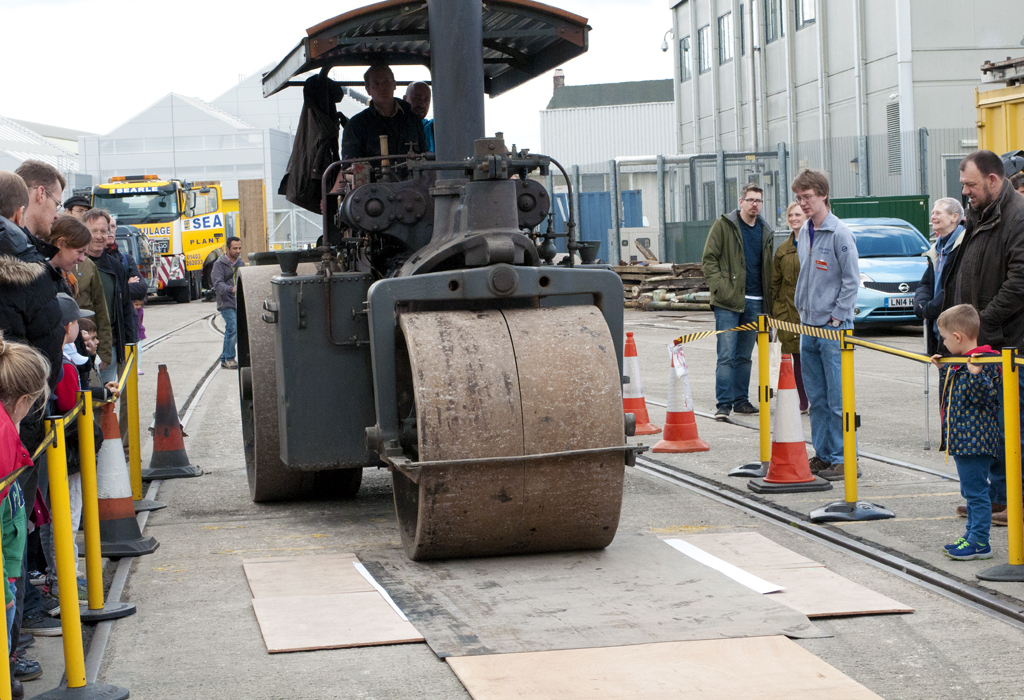 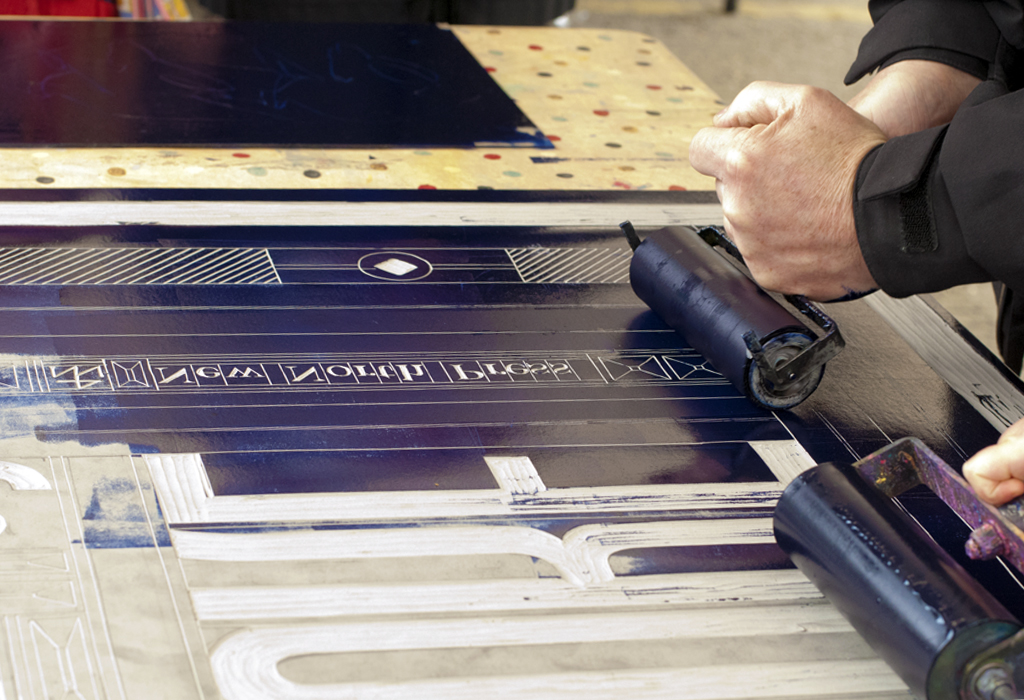 On Saturday we made our largest ever print using a steamroller! We were thrilled to be invited by Ditchling Museum of Art + Craft to take part in the second stage of their Big Steam Print event at the London Transport Museum depot, Acton. It was great to share the excitement for printing with everyone who came. Our print – artwork based on a letterpress forme cut and into linoleum – will be exhibited with all the other steamroller-printed work at Phoenix Brighton from 6th – 21st August 2016.

This post aims to explain the back story of the New North Press monogram, or printers’ mark.

A printers’ mark was a symbol used by early printers to trademark their work. From C15th onwards printers such as William Caxton, Aldus Manutius and Christophe Plantin used these decorative devices to sign their work and they became associated with a mark of quality.

Having always admired the watermark of the Zerkall papers that we often print on at New North Press – a symbol which invokes similar iconography to these printers’ marks – we decided to do some further research. We discovered that many of these historic devices use an ‘orb and four’ motif, related to the ‘orb and cross’ – literally the earth surmounted by the cross – which is also the alchemical symbol for antimony, an ingredient in type metal. Often incorporated was the ‘4’ character which long before the development of printing had been a mark of merchants to identify their wares.

Inspired by this we set about to form a New North Press printers’ mark by combining the initials NNP into a single device with an elevated P in reference to the 4 of the historic marks.

To be able to print our new mark alongside our type we initially cut it from linoleum and mounted it to type high. However on a recent trip to Switzerland, Beatrice visited good friend Dafi Kühne who offered to cut us custom blocks in wood using his pantograph machine – a far more elegant and durable solution. 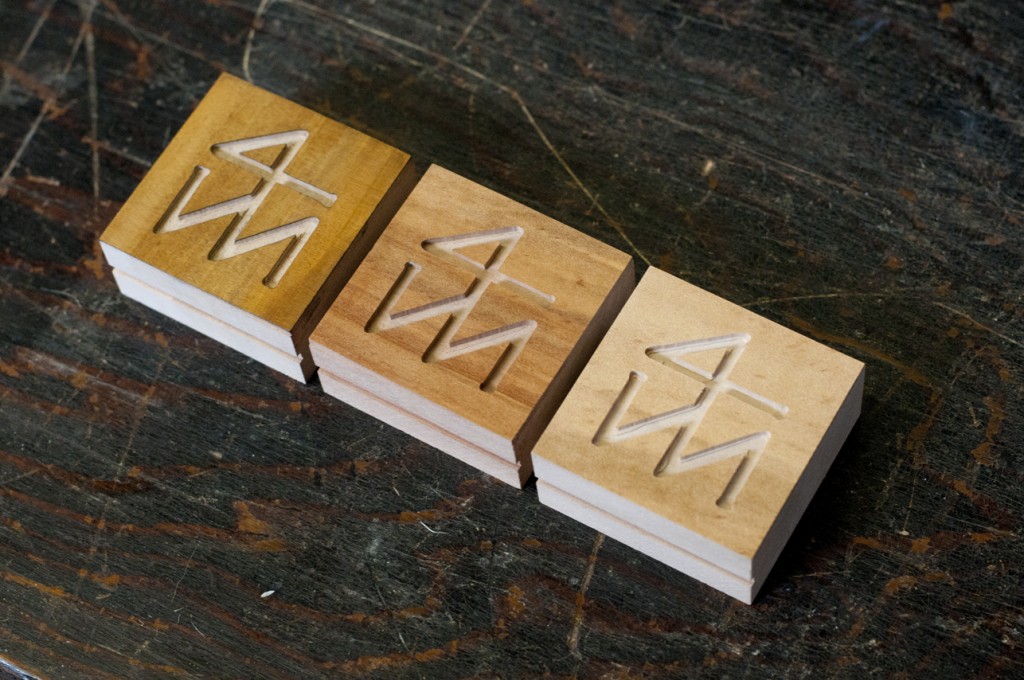 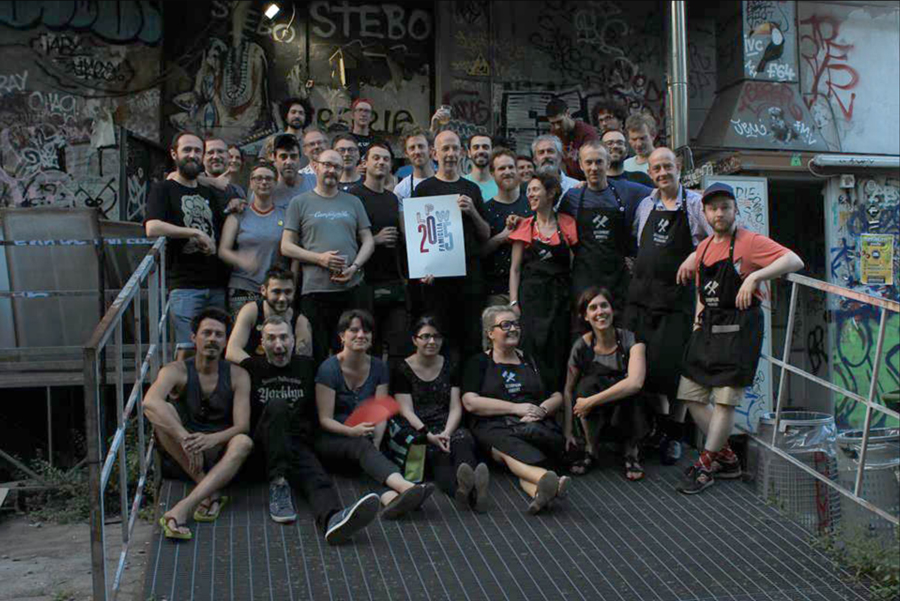 Such a pleasure to have been part of Letterpress Workers International Summit 2015 alongside a hugely talented and sweaty group. On a personal level it was also a treat to finally meet in person some of the artists we had made contact with back in 2010 for our Reverting to Type exhibition. 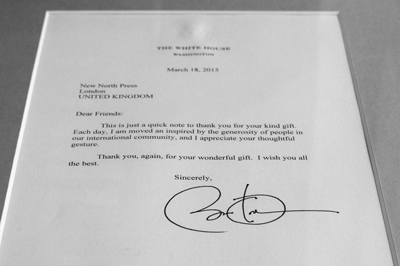 Our Gettysburg Address print is now a part of The White House’s collection!

We were very pleased and humbled to receive a personal thank you letter from President Obama himself. 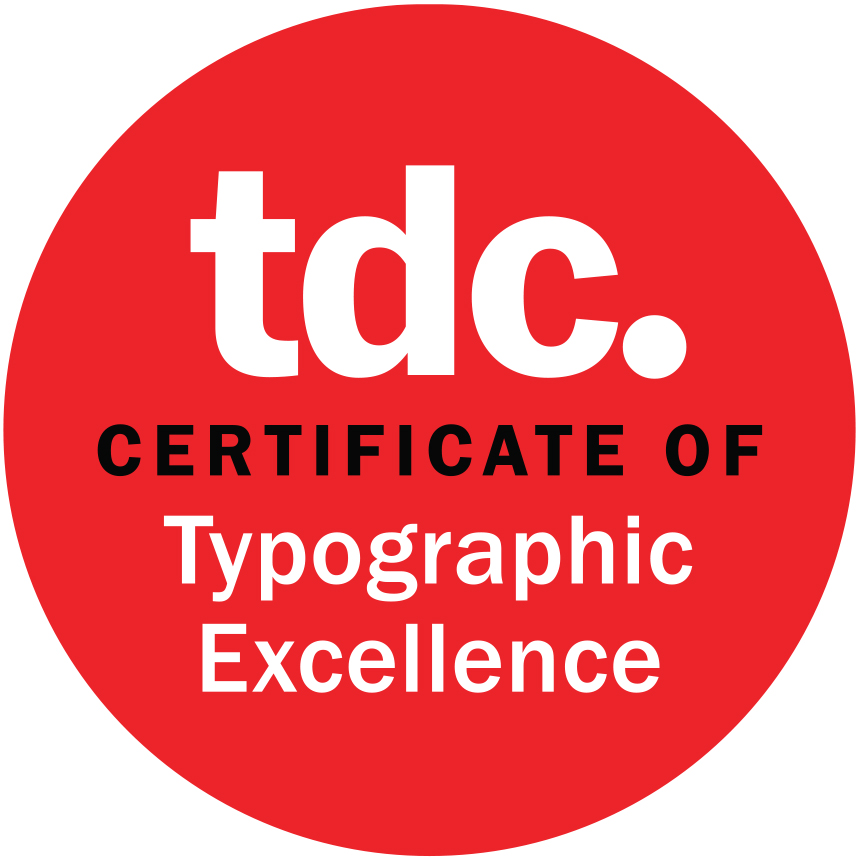 Congratulations to A2-Type and thanks again to all involved, particularly the Arts Council England who made the project possible. 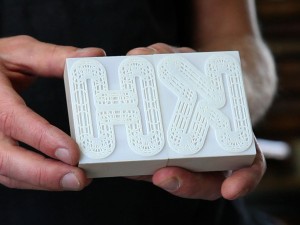 We’re proud to announce A23D, our 3D-printed letterpress font which will be launched at the V&A as part of London Design Festival. We will be giving talks and screening a film about the project, as well as a printing demonstration of the font in use.

It was our great pleasure to be visited by Jim Sherraden of Hatch Show Print (who’s trip to the UK coincides with a fantastic exhibition of Hatch’s work at CHELSEA space). Having contributed prints to our Reverting to Type show but never visited New North Press before, Jim described the workshop as “the cat’s miaow”.

This beautifully shot short film documents the recovery of a dormant hand-pull press. Filmmaker Tom Stokes joined us on our journey to LEFA Print where manager Ed Arthur had generously invited us to loan the press in order that it should have a second life. 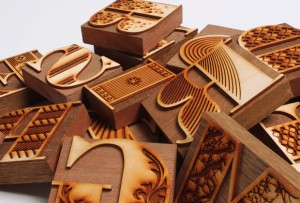 In a project initiated by course leader Nigel Bents, assisted by Paul Oakley and Jonny Holmes, the students designed ornamented letterforms, a selection of which were produced as a lasercut letterpress font. The letters were cut from 3mm plywood then mounted to blocks to make them type high. The finished font will live at New North Press as a new member of our type library. 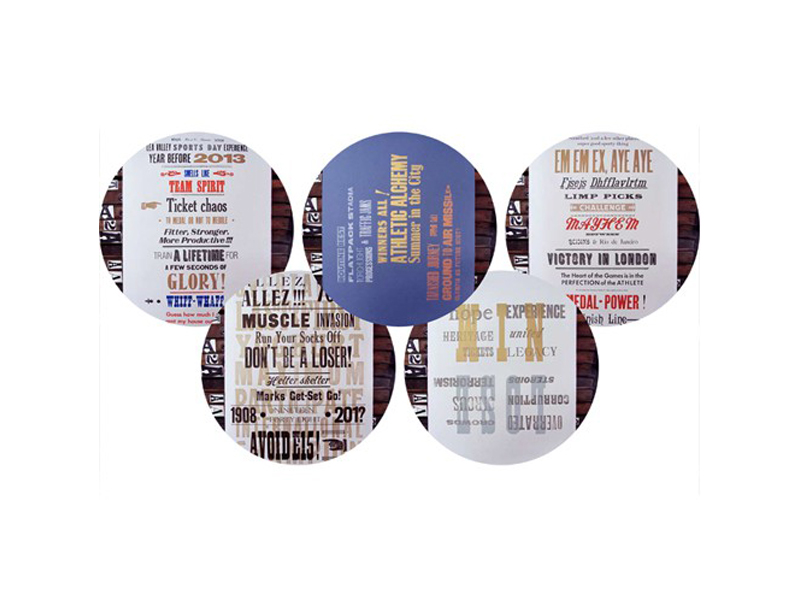 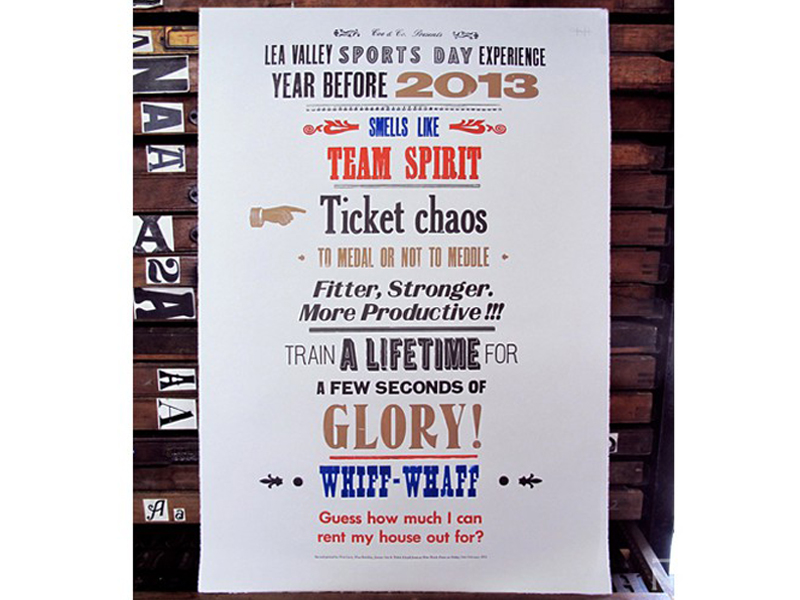 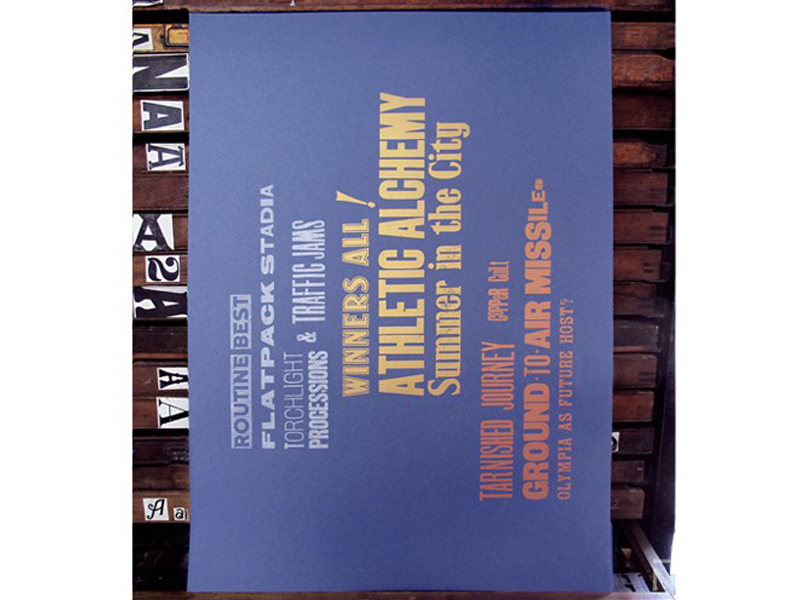 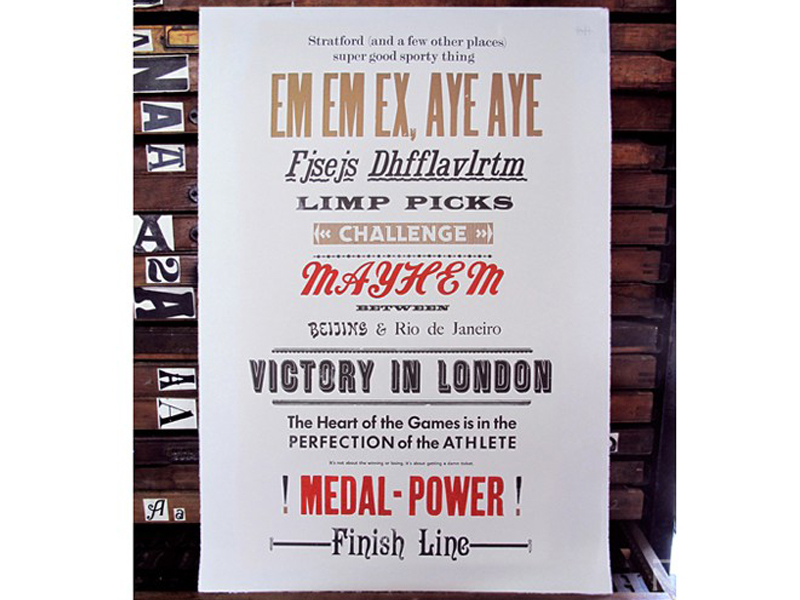 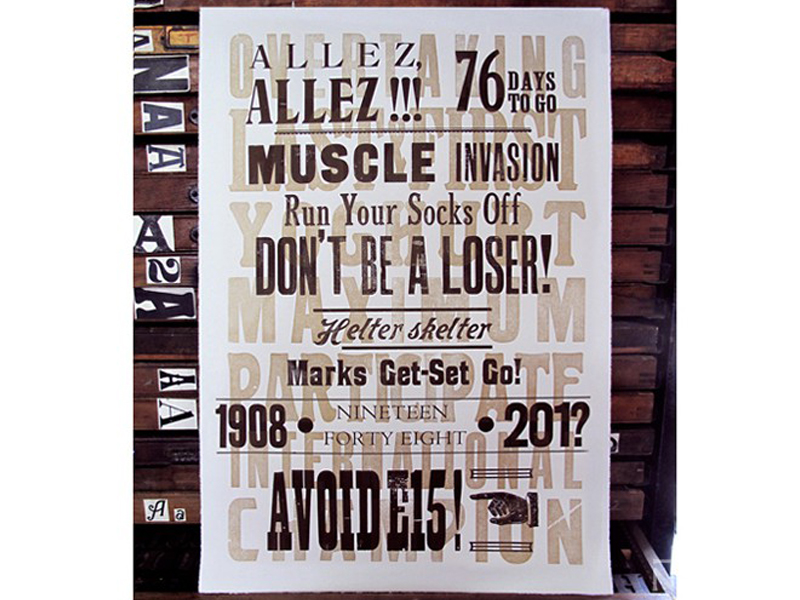 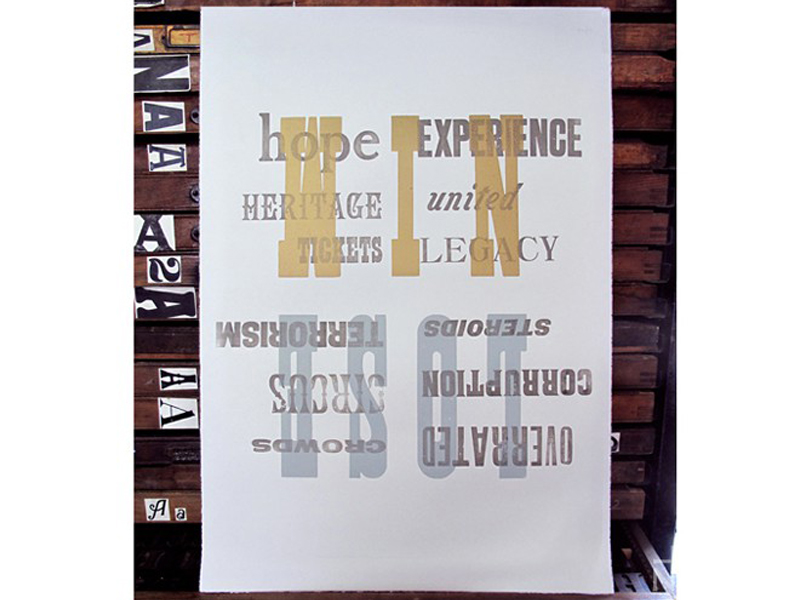 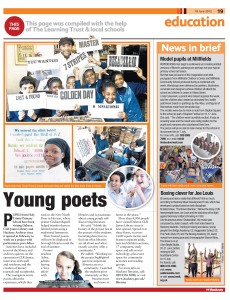 We’ve been working with pupils from Holy Trinity Primary School in Dalston and performance poet Adisa on a project about the appreciation of libraries.

The pupils, who were 10 years old, showed amazing proficiency at type setting and were thrilled to see the words they had written published by their own hands.

The prints will be displayed in libraries across Hackney until the end of the summer and the project was written about in Hackney Today.